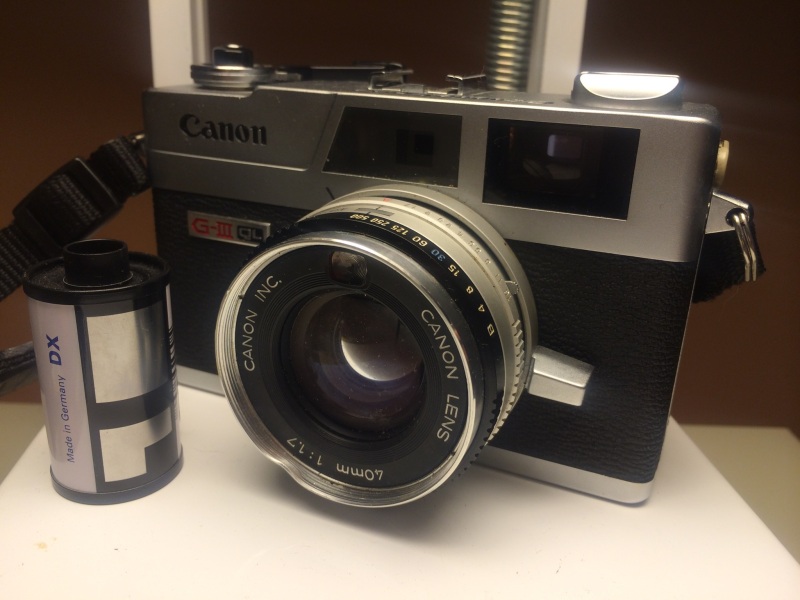 The Canonet QL17 GIII was the last of Canon’s fixed lens rangefinders. Manufactured sometime in the 1970’s, it has a 40mm lens and aperture priority automatic exposure. The QL designation indicates a quick-loading film system, while the 17 indicates a maximum aperture of f1.7. The Canonet range also included a QL19, QL25, and a Canonet 28 (f2.8) which was not quick loading.

Shutter speeds range from B to 1/500 set with a ring on the lens barrel. When in automatic mode a needle in the viewfinder indicates the selected aperture. Manual exposure is also possible without the meter, and the shutter will fire without a battery. Focus is via a lever on the left side of the lens barrel.

My example is a thrift score of which I’m particularly proud. I found it in the display case of a newly opened store for $4. It has a small dent on the filter ring but is otherwise fully functional.

It had however gone missing for a while. When I finally located it (in my daughter’s camera bag!) it had a partially exposed roll of 400ASA color in it. We took it along on last week’s Fairchester Hose Haulers excursion.

REFERENCES:
Camera Wiki
Manual
All Canonets at eBay. Prices are all over the map, so shop carefully.

Results may be delayed as my schedule is crazy this week.