For this week I’ve trotted out a curiosity. The Nishika N8000 is a stereo camera from the early 1990’s. It uses fixed focus lenses to take 4 simultaneous half-frame exposures on 35mm film. It was originally intended to use lenticular printing to create 3D images which could be seen with the naked eye. (Think of those bookmarks with jumping kittens or galloping horses which appear to move when you tilt them.)

The idea never caught on, and the technology is largely dead. The camera still takes stereo exposures though, which I will attempt to stitch together into GIFs. Even if I don’t succeed, the resulting images should be interesting. 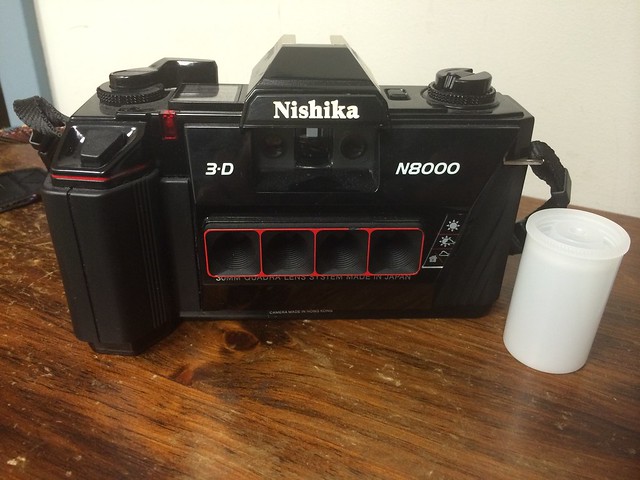 The camera has one fixed shutter speed and a switch on the front for 3 different apertures. An LED in the viewfinder lights if flash is needed. There is no built in flash, but there is a hot shoe. Everything is designed to work with 100 ASA film only.

I didn’t read the instructions this morning, so I’ve loaded a roll of 200 ASA color. I’m taking it to a muster tomorrow, but the weather is supposed to be gray. I’m sure I can compensate with the aperture switch.

Camera-wiki is a bit thin on information, but you can follow the links to see its cousins the N9000 and the Nimslo 3D