Life has been busy lately. I confess that I often have a week’s camera selected and pre-shot before I write my posts. This week, the calendar has finally caught up with me.

After the wooden ONDU and the very plastic SMENA 35, I felt like something German and metallic.  I have a few candidates, two of which were already loaded. There were also an Olympus point and shoot and a Kodak TLR competing for my attention.

Tonight I’ve finally settled on a choice, the Voightlander Vito B. 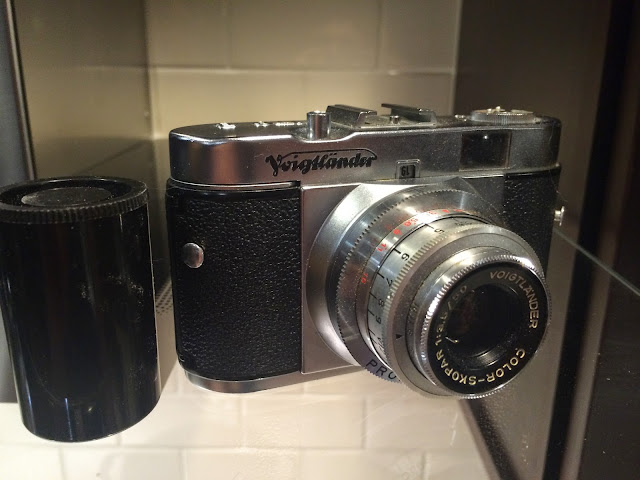 The Vito B was introduced in 1954. It is a compact viewfinder camera with full manual controls. Focus is by the guess system, with apertures from f/3.5 in a 50mm lens. Mine is the earlier version with the small viewfinder and a simpler Pronto 4-speed shutter (25, 50, 100, 200). The larger viewfinder version superseded it in 1959. Vito B’s feature a neat folding door on the bottom which also releases the back for film loading. The spindle does not pop up like in many other cameras. The toothed wheel below the lens sets the film counter, which is visible on the front of the camera above the lens barrel. The numbers are inverted so they can easily be read from above the camera.

The shutter in the Vito B is cocked by the film sprocket, not the winding lever. You can often find them listed on eBay as “shutter won’t fire,” “shutter stuck,” etc. A few questions of the seller may land you a bargain.

My Vito B was an early acquisition when I began collecting cameras. It was the first Voigtlander I bought to go with Dad’s Bessamatic, and it is still a favorite.

I’ve had it loaded for a while and don’t remember what film is in it. This week’s results could be interesting.

At eBay they run a bit more expensive than I usually buy, and I noted a few things listed as Vito B’s which weren’t. Caveat emptor.