Skip to content
This week has been interesting if a bit delayed. Sunday 4/28 was Worldwide Pinhole Day, for which I shot my ONDU. I also attempted to use my Schlemra, but I broke it. The repair/upgrade story should be coming soon.
May 1st was International Commie Camera Day, which brings me to this little gem: 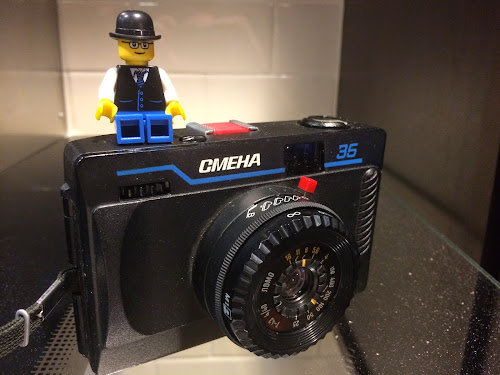 The SMENA 35 is a late Soviet pocket viewfinder. In operation and features it is very similar to the older SMENA 8M. It features a 40mm f4 lens. Aperture is set by a ring on the front of the lens which has an alternate scale for film speed. Shutter speed is set using weather symbols on the top of the lens barrel. There is an alternate scale under the barrel which shows 1/15 to 1/250 + B. Focus is via zone (guess) only.

By design, the camera uses the Sunny 16 rule to expose films up to 250 ASA. In practice an auxiliary meter or simple knowledge could be used to expose for higher speeds.

I loaded mine with HP5 400ASA and took it out on a wet day last week. We shall see if anything interesting happened.

The eBay search doesn't differentiate well between the SMENA 35 and other SMENA 35mm camera, but they are listed and are relatively inexpensive. Do watch the shipping, though, as many are coming from their original Soviet homes.