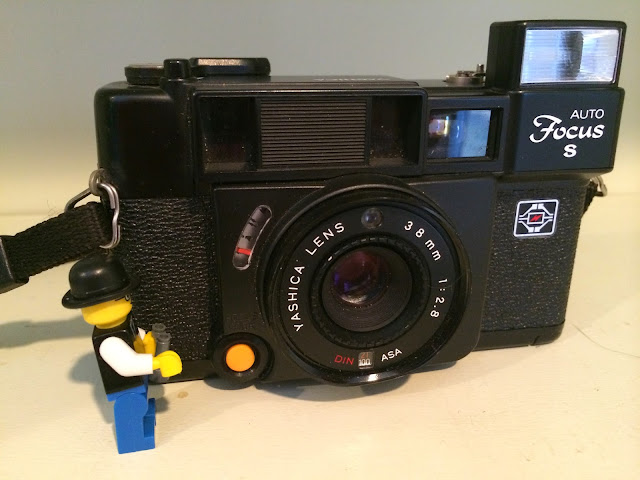 There’s not a lot of concrete information about this camera on the web.  The Yashica Auto Focus S appears to be an early model point-and-shoot camera.  It was part of a series which also included date imprinting and motor driven models.  I’m guessing it dates from around 1980.

It features a 38mm f2.8 lens with auto focus and auto exposure.  The built in flash is manually activated by popping it up. A red LED flashes in the viewfinder when the flash is needed.  Film advance is manual on this version.

There is a focus indicator on the front of the camera next to the lens. It is a bit odd in that it shows where the focus was after the shot is taken. The only way to know where the camera is focusing before shooting is to use the yellow focus lock button. Once locked, the only way to release it is to trip the shutter.

The focus and shutter mechanisms make a ZIP noise when they fire. (Check out this Youtube video. It’s not mine, but it demonstrates the camera well.)

I found mine in a thrift store for $6. It’s a neat and eclectic little automatic, and I’m looking forward to using it. I’ve loaded a roll of Lomochrome Purple to try this week.

Manual for the motorized version