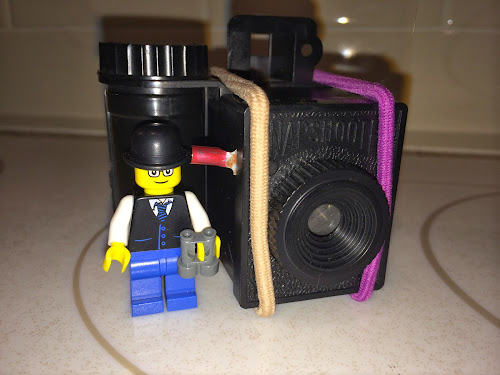 This week’s toy camera is one of the most toylike I’ve used. The Snapshooter from the Plastics Developmemt Corporation of Philadelphia, PA was marketed as part of a club. It came with a 126 format cartridge of black and white film, although color was also available. Users were encouraged to return the film to PDC for processing, but the instructions did note that your local lab could also develop it.

It consists of a fixed focus, fixed aperture lens attached to a single speed shutter. This arrangement clips onto the film cartridge which also forms the back of the camera. Mine is held together with elastic bands as an added precaution.

My example came with a cartridge which had expired in 1974. I tried it anyway, but the results were unusable. I’ve reloaded it with modern Fuji 200 color, and I will be carrying it for the next few days.