We've completed the Pdexposures $20 challenge. To recap the goal was to buy, load, shoot, and process for under $20. Beth and I both took a shot, and our initial quest is documented here. 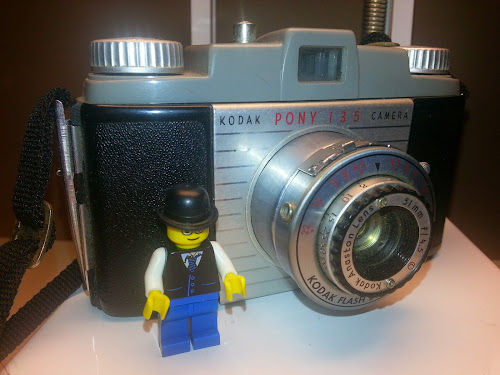 My Pony 135 was manufactured sometime between 1950-1954. It's a lightweight Bakelite and plastic assembly with the lens and shutter mechanism mounted in a collapsible tube. The shutter goes up to 1/200 and the lens opens to f4.5. Film advance is via the knob on the right, with a rotating dial for the counter. A small lever on the back must be tripped to release the mechanism before winding, and another lever on the lens manually cocks the shutter. There is no double exposure prevention. The knob on the left rewinds the film. There is another dial on the top plate which serves as a film type reminder. Shutter release is on the top plate next to the finder.

Focus is “guess” only with indications in feet on the lens. There is no meter.

I enjoyed shooting with it. Everything is manual, but that's easy on a sunny spring day. Beth and I took a walk around downtown Newburyport after an appointment. I had one accidental double exposure, and near the end of the roll I began to feel the shutter was running a bit too slowly. This was confirmed when the photos came back from the lab. My biggest mistake, however, was not giving the camera a good dusting before use. Years of flea market dust made its way onto my negatives, spotting them. I'm hoping for better results next time. 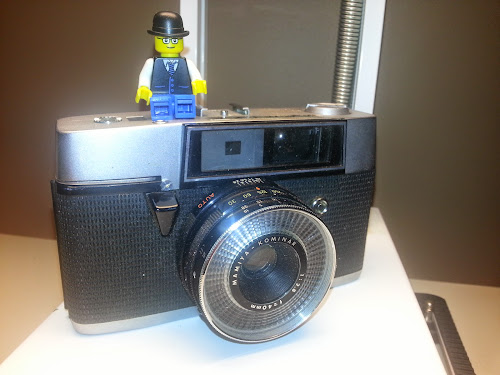 Hailing from 1962-ish, I believe this to be a Mamiya EE Super Merit. It has no model name or number marked on it. It's a shutter-priority auto exposure rangefinder. It uses a selenium cell around the 40mm f2.8 lens. Shutter speed is adjustable from 1/30 to 1/250 with no B mode. Exposure may be overridden and manually set with a ring on the lens. Focus uses a small round RF spot inside the viewfinder, and a needle indicates the selected f-stop at the bottom of the window. Shutter release is located on the front of the camera. Film advance and rewind are via the commonly accepted modern style.

Beth shot a bit with it on our safari then lost interest. She loves the rangefinder but is more of a fan of 90s automatics for her regular shooting. (I'm working on her!) She was also put off by the lack of a strap. the body has no lugs, the case is long gone, and a fear of dropping it dampened her fun. Even though it's not worth much, she's too respectful to risk dropping a camera. I packed it with me on a hike to Tuckerman's Ravine and finished the roll.

Of note is the fact that I discovered another local drugstore which still has a mini lab. Processing was thus much cheaper. It had a few dust issues, but nothing like the Pony above.