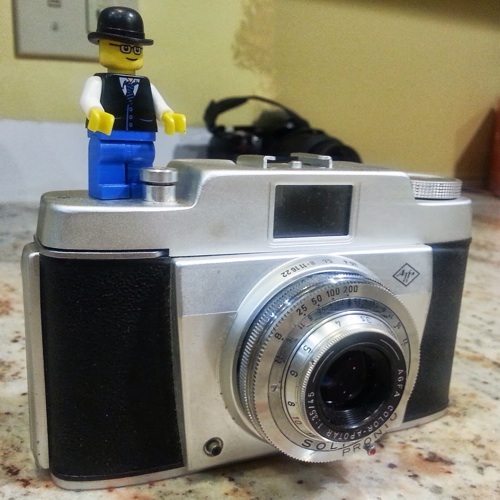 “In your Agfa Solina you have acquired a camera of the highest technical perfection. Everyone will congratulate you on your purchase.” – Agfa manual

The Solina was part of Agfa’s Silette line of fixed-lens viewfinder cameras manufactured between 1953 and 1974. Some were also sold in the US under the Ansco name. Mine appears to be an early version, featuring the Color Apotar f3.5 45mm lens and Pronto 1/25-1/200 shutter. It uses a guess-focus system, and unlike later versions it has a simple viewfinder and no metering capabilities.

I found it in my local thrift store recently for $8.00 complete with a decent leather case. The case says “Made in Germany” in English, so I believe this was an official export model despite carrying the Agfa name and not Ansco.

Beth chose the Solina for this week’s shoot. I could not decide, so I sent her into the camera closet with instructions to pick something cool. I think she succeeded. I’m considering making this a feature every 4th week. I’ve loaded it with one of my last rolls of Ektachrome E100G, and I haven’t decided whether to cross-process it or not.

eBay – as of this writing, there are 2 similar Solinas and a whole bunch of Silette variants up for auction. Happy bidding!