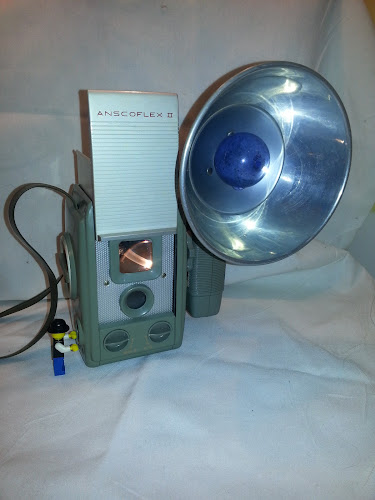 George has been pressed into service on his first day on the job. He has his shot all lined up and is ready to fire the shutter. The original photos for this post were lost in a small digital crash, something which will never happen to film.

The Anscoflex II was introduced around 1954. It is a sheet-metal bodied pseudo-TLR styled by Raymond Loewy. A large sliding front piece covers the fixed-focus lens and forms the viewing hood when opened. The waist level viewfinder is large, bright, and non-focusing. In essence it's a fancy box camera. It takes 12 6×6 cm exposures on 620 film.

The 'II' is a deluxe version which includes a close up filter and a yellow filter to increase contrast with black and white films. Both are permanently installed; they swing into place using the small dials below the main lens. Film advance is via the large knob on the right side, which ratchets through a 90 degree arc. Winding on sets the shutter, preventing double exposures.

I purchased my example for a few short bucks on eBay after hearing them mentioned on the Film Photography Podcast. It came with a matching green leather case, flash attachment, 6 P25 flashbulbs, a 620 spool, and a nice carrying case. The original owner's name and address are on a sticker on the back. Someone obviously cared for it over the past half of a century. I've loaded it with a roll of respooled Portra 160 from the FPP Store.

Want one? Try eBay. As of this writing, there were over two dozen listed at reasonable prices.