1993 was a watershed year. Just out of college, I had the whole world before me. I began dating the future Mrs. Mack505 that fall, and then my beloved VW died.

It wasn’t necessarily a terminal failure, but I had neither the skills nor the money for a major repair. I was off to the local used car lot with paycheck in hand. I came home with my first truck (a 1989 Dodge Dakota,) and my first car loan ($3000.)

The truck was perfect for me. A short cab, short bed, 4×2, 4 cylinders, and a manual transmission made it cheap to buy and cheap to run. It had one option: an FM stereo radio. I added some ballast in the back, a set of used snow tires, and a tape deck. A plastic box in the back kept my duffle dry on weekend trips to visit the future Mrs.

We covered a lot of miles in the next four years, all at 68 MPH or less. With the exception of one early warranty issue it never failed me. Eventually I landed a better job and moved on to my first NEW car (and my first five-digit loan balance.)

Some days I miss the simplicity.

Fast forward 19 years. The search is on for the right plow truck for The Farm. A Saturday detour down a NH back road brought me to this gem: 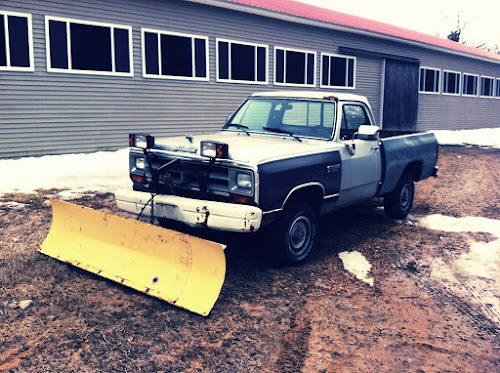 Yes it’s a 1989 Dodge. This one is the larger W100. With a V8, automatic, 4×4, and a plow it would have been out of my league all those years ago. It came well-equipped back then with cruise control, intermittent wipers, two-tone paint, chrome step bumper, cloth seats, and a sliding rear window.

Today it has four-tone paint and will never go fast enough to use the cruise control again. It was ridiculously cheap, and it’s perfect for the farm!

Getting it home was an adventure involving a borrowed trailer, cribbing, jacks, and my Duramax. We made it with no injuries, no damage, and no tickets so it was a successful day. I shouldn’t be having so much fun with a 23 year old truck.

In keeping with family tradition, it needs a name. Suggestions so far have included Beowulf and Mater. Beth informs me it can’t be a Mater because it doesn’t have a hook. Perhaps we should have some sort of contest. Suggestions will be accepted in the comments, and I’ll work out the details later.