About a year ago, Mrs Mack505 bought a used truck.  It was in pretty good shape, but I knew it would need a new rear bumper.  It just had that look about it.  Shortly after she took delivery someone backed into the truck in a parking lot and revealed that the situation was worse than I’d thought.

It wasn’t a bumper.  It was the idea of a bumper; chrome plating stretched over a lattice of rust.

I began to do some research.  These bumpers aren’t cheap, although they do seem cheaply built.  They all rust away, so there are none available from any local junk yards.  I finally settled on a Peacemaker pipe bumper. It’s rugged, cool looking, and no more expensive than a chromed knock-off.

I got lazy and never placed the order. We just drove it.

This month the inspection came due, and I know it won’t pass with a rusty husk on the back.  No problem, we’ll just buy the replacement now.

It was time for some redneck engineering.  The resultant pressure treated contraption is ugly as sin, but it should be legal.  It covers the brackets, displays the plate properly, and has no jagged edges. 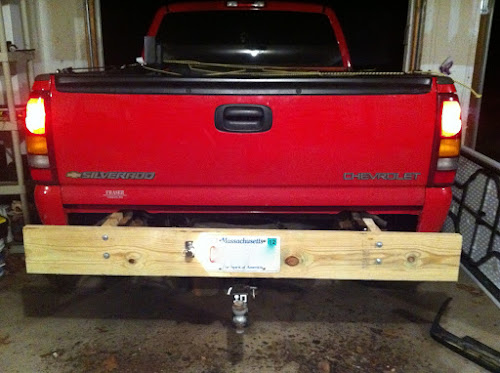 And it should be going away in less than a month.