This is part four of a multi-part series.  We took a brief detour, but when last we saw our heroes, they were grinding southward out of northern NH at about 25 MPH. . .

The first long hill was interesting. I’d forgotten how underpowered these old trucks were.  I was remembering quickly.  We would get up this hill, but we’d do it in our own time.

The first few descents were interesting as well as I got the feel of her brakes and steering again.  A big old truck demands defensive driving of the highest order, as you never want to trust that they will stop or turn as quickly as you expect.

Eventually we hit a good pace.  The weather began to thicken into fog and drizzle, and I discovered the leak in the windshield.  A gap in the rubber at the base meant that each left turn brought a spray of water on my face.

The previous owner had warned me that he ‘wasn’t too sure’ about the alternator.  Neither was I. The voltmeter hovered just below 12 volts, and the ammeter was showing a slight draw.  I couldn’t be sure if she wasn’t charging, or if the meters were just off slightly.  I resolved to use the wipers and lights as little as possible and see how far we could go.  I did have a spare battery after all.

The trip through Franconia Notch was surreal.  I was driving a piece of personal and department history through some of God’s most beautiful country, yet I could barely see beyond the end of the hood. 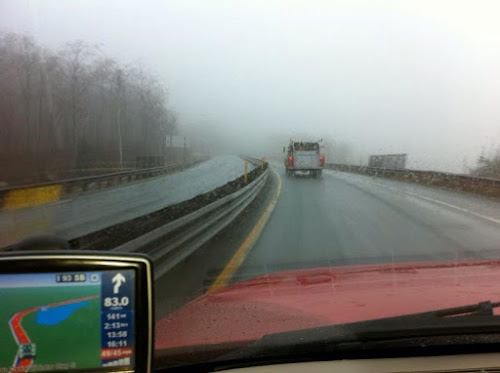 At the foot of the Notch we stopped for food and fuel.  As the gas gauge hasn’t worked in 25 years, this allowed me to calibrate for our trip.  We were doing 6 MPG.  One more gas stop should leave plenty to get home.

Back up on the highway we settled in at a comfortable 55 MPH.  Climbing the hills wasn’t too bad.  Oil pressure and temperature were holding fine, and voltage remained steadily just below 12.  Vacuum reserves would drop on the long hill climbs but immediately come back as soon as I lifted the throttle slightly.  Things seemed to be going well.

Then came the first thump.  It sounded like I’d hit a piece of road debris.  I hadn’t noticed any road debris. . . All the gauges still looked OK.  Nothing looked wrong in the mirrors, and the chase truck wasn’t flashing its lights.  Onward.

Just north of Tilton it all began to come apart, both figuratively and literally.  Three things occurred almost simultaneously:  I felt another thump accompanied this time by vibration, I saw something fly off behind me in the mirrors, and a motorist pulled up next to me honking and waving frantically.  Thank you, sir, I can feel and see it.

Paradoxically as I slowed the vibration worsened.  I couldn’t have blown a tire.  The sound wasn’t loud enough, and the ride was still too smooth.  I found that one of the rear tires had begun to disintegrate.  It was still holding air, but it was throwing off large chunks of tread.  This would not do.

We limped into a Walmart parking lot at the next exit, two hours from home and one hour from dusk.