This is part 2 of a multipart series. If you missed the beginning, you might want to check out part 1.

So it was off to northern NH to retrieve the Howe. The current owner said she’s been well maintained and should be ready for the long trip home, but antique trucks can be full of surprises. I loaded the pickup with every possible supply and tool I could conceive of needing: oil, coolant, brake fluid, jumper cables, spare charged battery, air compressor with hoses and chuck, extension cords, fuel stabilizer, lead substitute, Marvel Mystery Oil, and an assortment of basic tools.

Captain Murphy often rides with me. (I know he’s at least a captain because I’m a lieutenant, and Murphy outranks me.). Whatever breaks, it will be the one thing I didn’t consider. That’s why I also carry the number of a good heavy towing service.

The GPS says it’s a 3 1/2 hour trip up. It’s pretty accurate, but it translates to a 5 hour return trip at 1963 speeds. It’s gray, foggy, and threatening rain, but at least the weather is still unseasonably warm.

My first glimpse of her is in her owner’s driveway. We round a corner, and there she is at the top of a small rise. The last 18 years have not been kind to her, but I’ve aged a bit as well. Her body is not as good as I had hoped, but it’s much better than I had feared. If the mechanicals are intact, I can work with this.

They seem to be OK. She starts quickly and idles well. Her original siren is missing, but I know where it is. Her original seat has been replaced with buckets, but they seem comfortable. She’s lost her 35′ extension ladder, and her nicely matched set of chrome suction hoses has been replaced with a ratty mixed set. The brakes need bleeding. I hope that’s all; it may be a bad master cylinder. The tires are iffy, and I’ll need to find and repair that exhaust leak. And I’m sorry, East Haven, but the lettering job is ugly. It will have to go. Some of the original paint may yet survive under it, though.

In summary she needs a fair amount of work, but it’s not insurmountable. We take care of the formalities, and then I’m off.

It’s a blast from the past. Low revving, lots of torque, lots of noise; but she doesn’t seem as hard to drive as I remember. Perhaps I’ve grown up, or perhaps it’s the lack of a deputy chief watching me from the right seat.

It takes less than a mile for me to realize the first tool I’ve forgotten: duct tape. Fortunately there is a hardware store next to the gas station. With a full tank of gas/Stabil/lead substitute mixture, and with the headliner taped securely out of my field of vision, we begin the long hard climb south out of town on US 3. 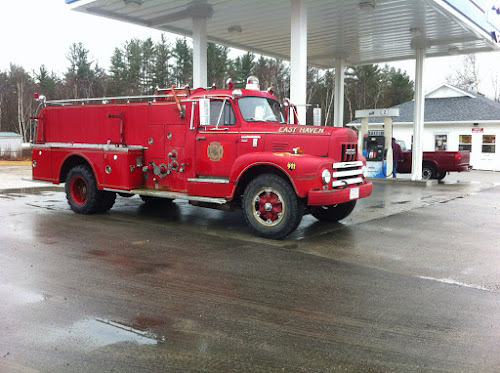