Many years ago I watched a volunteer firefighter climb down from the cab of his ladder truck in nothing but shorts, boots, and a helmet. He took a portable radio and went to investigate a box alarm. I was embarrassed — for him, for his agency, for the fire service in general and myself by extension. I don’t know what he intended to do if he actually found a problem.

Yesterday at the firehouse I was thumbing through the latest edition of Fire Chief magazine. There is a Pierce ad inside the front cover. It shows their newest shiny model Photoshopped into a Detroit fire scene. It’s a pretty truck, and it has some interesting engineering features. The mechanical engineer and apparatus buff in me is intrigued.

THERE’S NO SUCH THING AS TOO PREPARED. BE SITUATION READY blares the tagline. And directly below the ad copy is this guy: 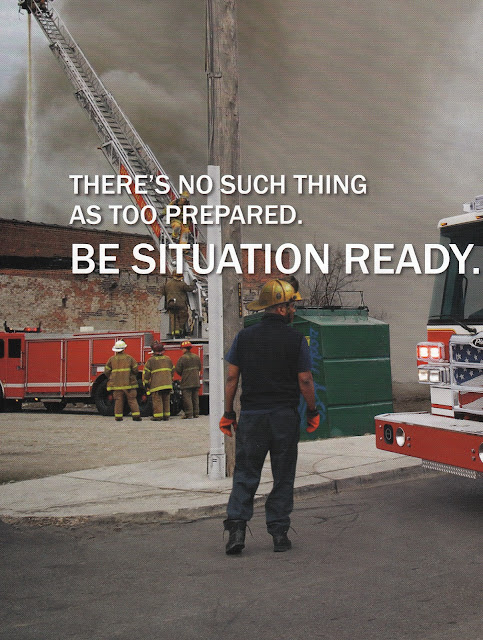 T-shirt. Some kind of vest which looks like fleece. Orange fireball gloves(?!). And untied duty boots.

BE SITUATION READY. Hey, at least he is wearing a helmet.

I can only hope he’s an actor. He’s not SITUATION READY for anything more than fueling the truck on the way back to quarters.

I could philosophize about the stereotype that this encourages, or about how some city managers value shiny fire trucks over having sufficient numbers of skilled staff. I could rant about how someone at Pierce and someone at Fire Chief magazine should have caught this. (ORANGE RUBBER GLOVES!) I could note that Pierce has a major social media campaign on Facebook and YouTube for product engagement.

But I’m too embarrassed.