. . .comes around. Back in 2000, our fire chief was looking for a graphic scheme for his new Tahoe. It was our first white vehicle, so it was a clean slate. As a joke, one of the firefighters (me!) gave him a Matchbox toy Tahoe with Fire Chief lettering and great swooping red and black stripes.

He liked it so much it became the basis for the actual lettering scheme. For a long while the whole story was on the department website.
Later, and for other reasons, the rest of our fleet evolved from red to white with crisscrossed red and gold stripes. They look sharp, if I do say so myself. We now operate the only non-red apparatus in our county, and the white has become a major part of our identity and a source of institutional pride.
Today, while out shopping, I found these: 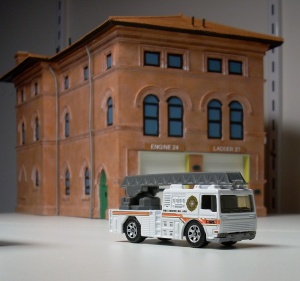 Now go check out our ladder. I’ll wait here.
Coincidence? Probably, but it sure is cool.